I have given my SAQA Benefit Auction quilt to Alicia to take to Philadelphia for me.  It was lovely to just rustle up a small quilt with left over fabrics from my Wide Horizons piece – and yes, that is now finished as well after much angst which has stopped me dealing with some admin I need to do!!

It is called Chusan – named by my husband as he felt the circles represented portholes.

Back to the admin – 2 SAQA newsletters to be written and images to be loaded onto a group website. Hope you have something more dynamic to do!!

SAQA have an exhibition deadline coming up for the subject Turmoil. I entered a quilt on the parallel exhibition called Tranquility. It is very soft and pastel in colour – rusted and naturally dyed fabrics. I will post it when I hear whether it got in or not!!! In the meantime, here is Turmoil waiting to be bound, a task I always put off if I can.

I took it over to friends last weekend who looked at it for a few minutes before commenting that it was disturbing and uncomfortable to look at – that works for me. Turmoil it is.  I need to bind, sleeve and label in in the next few days. Closing date is 29th February – Leap Year Day.

I hope you are working hard – Chrisse

A friend, Amanda, and I decided some months ago that we would buy a number of different fabrics and see which ones dyed best and which ones would work best with the stitch techiniques we use.  Finally last week, we cut up and dyed the fabric.

Here it is on the ironing board, prior to ironing and marking up the swatches.

It looks a little like an Indian dye shop – very bright colours. That is apart from the Chintz which has come out anaemic. It was PFD cotton but has dyed like a poly cotton. The polished sheen on it must inhibit the dye. Any ideas whilst I start ironing and labelling.

Happy new year to one and all.

The show at UWE is on. Stephanie’s husband took the day off work to help us hang the work. My husband is currently on a motor bike in India with friends of a similar age!! Our stand looks really good. Here are a few photos. Firstly, some small collages on canvas. 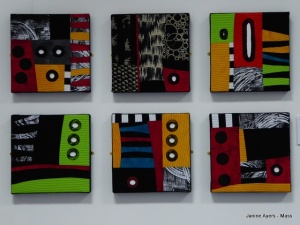 and one of the walls with my work 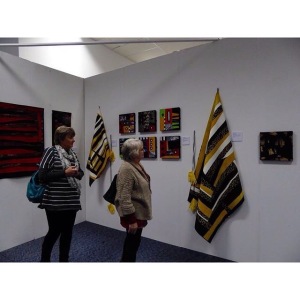 and some of Stephanie’s beautifully painted quilts – quilted glimpses from her home.

Will take pictures of other stands tomorrow.

I have been experimenting and making fabric collages. Well, that is what I am calling them. As they are pieced rather than layered, technically, I guess they are not collages but I have been using the design concepts of collages. I have also been making holes in my quilts – purposely. The collages are mounted on canvases so through the holes is gesso’d in white to look like the wall behind them. Maria thinks I should actually cut holes in the canvases – currently that is a step too far!!!

To crop the above image, I used my PhotoElements app which I have never used before. And then I discovered a lovely feature which made the collage look very different. I rather like the new image!!!

All the collages will be on view at UWE, Bristol from 12th to 14th November at the West Country Quilt Show.  I am sharing a stand with a friend, Stephanie Crawford who does lovely painterly quilts and wins important and pretigious awards.

Must get back to stitching on sleeves!

Yesterday, we went to Liverpool for the day, as you do. We went to see the Jackson Pollock exhibition at the Tate. I am really glad we went. It was a great exhibition which had some of my favourites ie the standard poster paintings plus some black drawings – large.  Lots of things to think about. No photography allowed.

The Tate Liverpool like to set up their major exhibitions so they lead into a lesser exhibition. I have been to two set up this way and I personally don’t like it. In both cases, I came out of the main exhibitions, this time Pollock, last time Mondrian, with my head full of fabulous images into a lesser not so good show.  And they set it up so you have to walk through the second one to get out. I am sure they have a reason!

The second one was an artist called Glenn Ligon and works of well known artists who have inspired his work. I know some of Glenn’s text work but had never had a name to put it to. There was some iconic work hung with his work, a Boetti world map and text embroidery, an Andy Warhol, a Chris Ollifie’s elephant dung and so on. The work wasn’t hung well and there appeared to be no logic or explanation as to why Glenn had chosen the works.

Today, we went to Birmingham and saw another interesting take – Andy Warhol and William Morris. The reason behind why the two artists’ work was hung together was too aserteric for me!! But there were some great works, iconic Andy Warhol pieces and beautiful very large tapestries made in William Morris’ factory. There was a set of Andy’s screen prints that I need to get copies of. There were four in different colourways and the resulting pieces looked quite different – an interesting colour study.

SAQA have a call for entry out for an exhibition called Stories of Migration. I should read all the blurb very carefully and I will in future.

I had a lovely image of a Canadian Goose so I made a quilt using it and then remembered that Candian Geese used to migrate from the UK in the autumn to hotter climates – they no longer do. Not sure why. They swarm together, thousands of them in September and make the most dreadful noise and then go back to their own patch of English water.

My problem – the narrative with the application form talks only about people who migrate and birds aren’t people!!! So I am not entering my quilt. Instead, I will share it with you and hang it at my stand at UWE 12th to 14th November in Bristol. And will read further than the title in future! 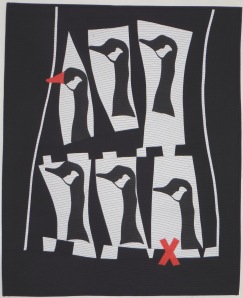 Now back to stitching for UWE.

I have been working with my poppy skeleton. I screen printed it with black ink on white fabric – it was a very messy print and I rejected it for my entry to the Structures exhibition in Henley. But I still loved the technically bad print!!

So back to black, white and red and here is a small piece for my Bristol UWE exhibition in November. 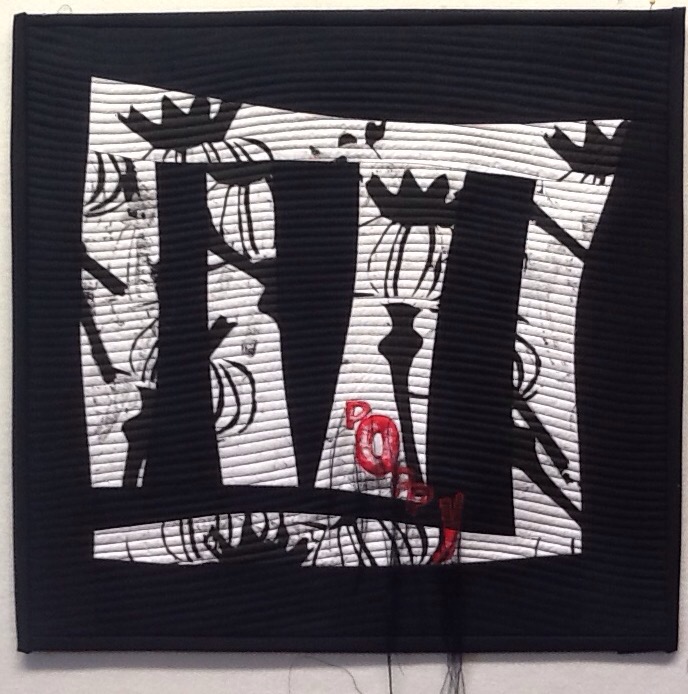 I now need to make another one to go with this one. Perhaps they will go on the front of the stand.
Keep stitching.

This weekend was my husband’s 70th birthday. We had a party for relatives and friends at his local golf club. Sue, a local friend from Devizes, very kindly did the table arrangements and very clever they were. The arrangements sat on small pieces of Astro turf, with golf balls and tees surrounding them. The genius  was in the “vases”. My husband makes bread three times a week and some of it is sold at the golf club for their refurbishing fund. So the flowers where arranged in loaves of bread. Magic.

This one is now sitting on our dining room table.

Was a very good weekend. But now need to get back to stitching.

I am a textile artist who designs and makes my own quilts from hand dyed fabrics.