Thanks to a Facebook friend, I have found some great grey dyes – Dharma Trading in the US have bought out a range of Hot Water Reactive Dyes and I now have a lovely range of real greys – not slate blues or greens …. 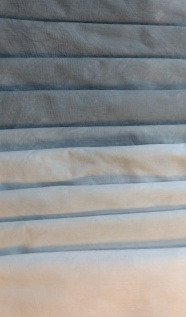 They do have a downside – they need more manipulation than Procion MX to stop blotching which means it is not possible to get the same level of texture I usually want. On the left is the blotchy effect and I has soaked the fabric in soda ash before dyeing – and on the right is the texture I get with Procoin MX. 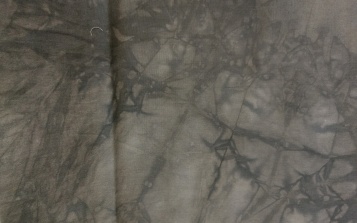 I also bought some ebony black so I added a full tsp and a quarter tsp of ebony to the grey to get darker colours. 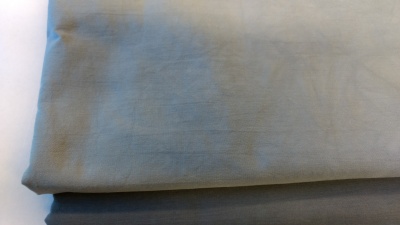 Although the image on the left looks like dark blue, it is actually grey -something to do with my ability to take photos on my phone!!

If anyone knows more about these dyes, I would love to hear from you.

In 2006, I joined the Committed to Cloth community and did a Wet and Wild Course. This included working with formusol as a discharge agent and using a needle nose bottle to doodle. I loved making these pieces. I have no idea why I stopped! Probably a difficult day job. After these doodles, I really lost my way – didn’t want to be a quilter, wanted to embroider, tried making unsuccessful whole cloth pieces and so on until the end of 2012, when I started to quilt. The next year I began properly quilting and working in series. But more on that later……..

Here are some phone camera photos of the doodle pieces. 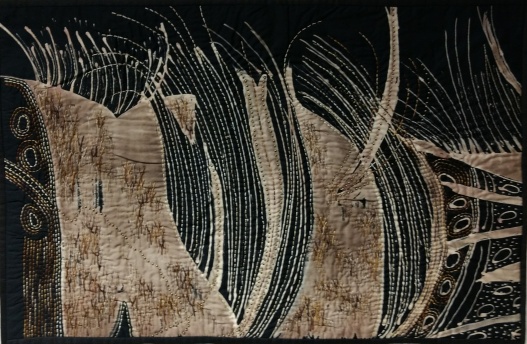 The first three – design principles play no part in these!

And then some which reflect the shapes of a later series, Pieces of Crow and one which resembles a quilt!! 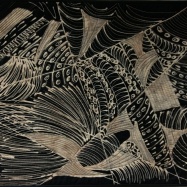 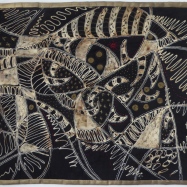 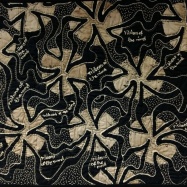 And then the wheels fell off and my work got somewhat random!! I started working with trees. It could never be a series as I had 11 meters of lovely cloth printed with a single motif of trees all done in one session. How was that going to develop as I worked each piece. The last one I pieced ended up in my UFO box when I saw no future for it and realised that the chances of my being able to sew neat nine patches was nil. When I do a talk, I take my box of UFOs and throw them on the floor – it makes people really happy to know that I don’t get it right all the time!! Someone asked for it and completed it for a charity so some good came of my misfortune 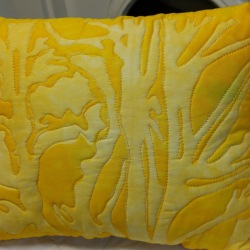 The rest of the fabric is waiting for me to make it up into cushions like the yellow one above – one day.

I am a textile artist who designs and makes my own quilts from hand dyed fabrics.